The anti-fall ladders can be ladders with cages also known as “alla marinara” or ladders with integrated rail.

The ladder with cage or “alla marinara”, designed and built according to the provisions of art. 113 of Legislative Decree 09/04/2008 No. 81, paragraph 2 of which, is a fixed ladder capable of allowing the operator to climb into a roof.
Ladders with a height of more than 3.00 m fixed on vertical walls or frames or with an inclination of more than 75 degrees, must be equipped, starting from 2.50 m from the floor, with a solid protective metal cage with meshes or openings of such amplitude as to prevent the accidental fall of the person towards the outside.
The wall of the cage opposite the level of the rungs must not be more than 60 cm away from them. The rungs must be at least 15 cm away from the wall to which they are applied or to which the ladder is fixed.

The ladder with track complies with the EN 353-1: 2002 standard which deals with guided type fall arrest devices including a rigid anchor line. It has an integrated fall arrest system. One of the uprights houses a track on which a special trolley runs with a locking device in the event of a fall. Entirely made of aluminum, it is used for vertical applications and is permanently fixed to the building structure.
The ladder is certified for use by two operators simultaneously with a distance between the two people of 3.00 m equipped with a special trolley. The sliding carriage with locking device is equipped with special bearings that slide on the guide integrated in the upright. The shuttle is equipped with an energy absorber according to EN 355: 20013 to be connected to the sternal attachment of the harness. 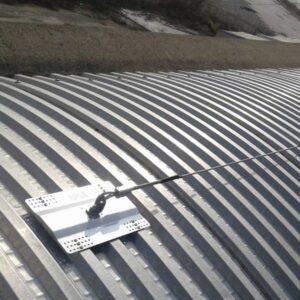 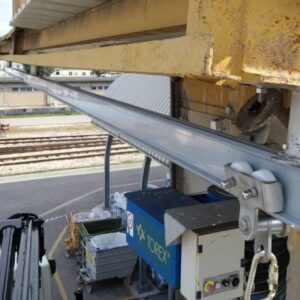 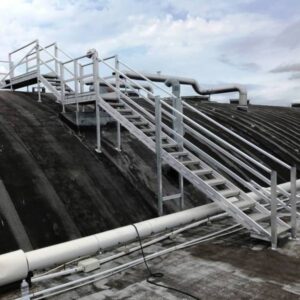 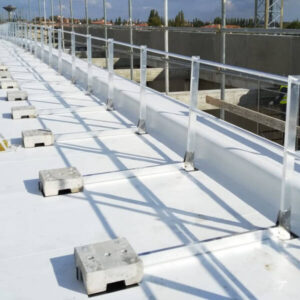 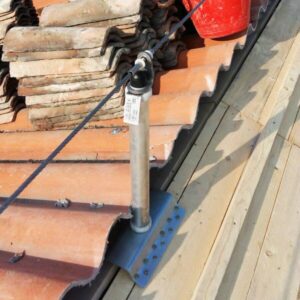